Gatekeeping Versus Monitoring: Evidence from a Case with Extended Self-Reporting of Sickness Absence 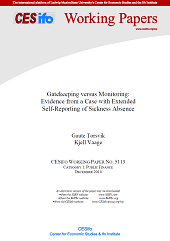 We examine the impact of a policy reform that gave employees in a municipality extended rights to self-declare sickness absence. To identify the effect of bypassing the physician as an absence certifier we contrast the development of absence in the reform municipality with absence in similar municipalities. We use a standard difference-in-difference comparison and the synthetic control method to quantify the effect of the reform. Using these methods we find that the reform reduced sickness absence by more than 20%. It is the incidence of absence spells that declines, not their length. To explain this result, we emphasize that the reform not only removed the physician from the picture, it also put the employer more firmly into it by prescribing a detailed follow up scheme (phone calls, meetings, flowers) for the employer (the first line-leader) and the employee calling in sick. The combination of extended self-certification and employer involvement can be taken as a sign of trust and concern for the employees’ well-being or as enhanced monitoring. Both interpretations can explain the drop in absence we observe.