How the Internet Changed the Market for Print Media 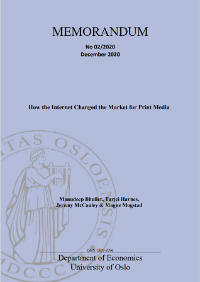 This paper analyzes how household adoption of broadband internet affected traditional print media, using data from the Norwegian media market over the past two decades. This setting offers unusually rich data on newspaper firms and consumption of print media combined with a plausibly exogenous variation in the availability and adoption of broadband internet. The overall print circulation of newspapers in Norway fell by 30 % between 2000 and 2010. Our estimates indicate that 40 % of this reduction was caused by increased internet adoption. However, we uncover important heterogeneity in the impacts across different segments of the newspaper market. While most of the decline in sales suffered by tabloid and non-tabloid national newspapers is attributable to increased internet adoption, none of the decline of local newspapers can be explained by increased internet adoption. We further show that newspaper firms responded by dramatically cutting costs, either by reducing labor inputs or the physical size of their newspaper, and in doing so avoided profit loss. Local newspapers moreover responded by reducing tabloid content and publishing more serious news, which appears to have mitigated the negative impacts on their sales. Our study provides some of the first causal evidence on how newspaper firms respond to a major technological change that threatens their revenue.