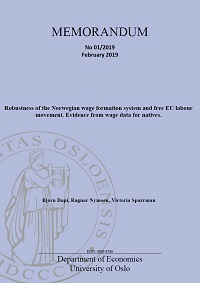 Norway experienced a high immigration flow after the EEA directive in 2004 stating workers right to free movement within the European Union and EEA-countries. There is no clear consensus in the literature on how immigration affects native wages, but some studies using Norwegian micro data have estimated a negative effect of higher immigration for some type of workers. In this paper, to capture that the wage setting is highly coordinated in Norway, we model a system of native wages for three sectors; manufacturing, private service industries and public sector. We estimate that labour immigration has had a negative effect on the attainable wage growth for natives in all three sectors, but that the largest and most direct impact on wages has been in the private service industries. Immigration is found to be exogenous with respect to the parameters of our model of wage formation.