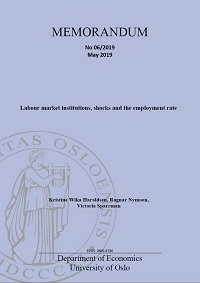 The average employment rate for the OECD countries was close to 63 percent in the period 2000-2015 but there is considerable variation within and between countries. We find that a dynamic model for employment, derived from a multiple equation macro model with institutional and population variables, can explain much of the development. The estimated models capture the dynamics well and they imply interpretable estimates of the normal employment rate level, conditional on the state of the institutional variables in 2015. The estimated normal employment rate is 2 percentage points higher when shocks are included in the model, implying that shocks have persistent effects. Regulations of the labour market are important for the effect of shocks. Regulated labour markets amplify positive shocks while negative shocks are dampened compared to less regulated labour markets. In the estimation of the models, we use standard panel data estimators, as well as a version of the within-group estimator which is robust to structural breaks in the means. Empirically we find that some of the estimated coefficients of the institutional variables are robust with respect to the breaks, while others are not. We find that the interaction effect between benefit replacement ratio and benefit duration is robust, and that it can significantly affect the employment rate. This result implies that changes in replacement ratios (or duration) may be expected to have larger impacts in countries where duration (or replacement ratio) is long, compared to countries characterized by shorter duration (or replacement ratio).