A new model for wage formation in Iceland 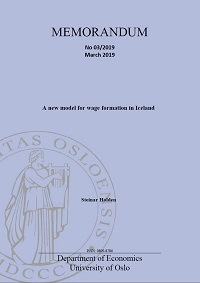 Iceland is recovering after a severe crisis, which is an impressive turnaround by any standard. However, the improvement of the economy has led to a rising wage growth, which, if it continues, may lead to another boom-bust cycle. Persistent high wage growth is likely to induce the central bank to raise the interest rate, so as to prevent inflation from exceeding the inflation target. A combination of high wage growth and a monetary tightening would likely lead to appreciation of the Icelandic krona, which would weaken the competitive position of Icelandic firms.
To ensure that wage growth is reduced down to sustainable levels, Iceland would benefit from adopting a wage leadership model, also referred to as a pattern bargaining model, like the Norwegian “frontfag-model”. Establishing a wage leadership model requires three steps.
- Develop a common understanding among the labour market parties about the challenges and the need for sustainable wage growth.
- Establish a wage leader which negotiates first and thus sets the norm for the wage growth in other parts of the labour market.
- Ensure that the norm for the wage growth is followed elsewhere in the labour market.