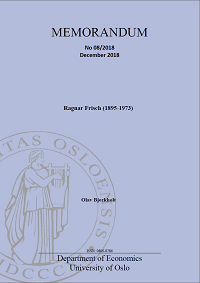 Ragnar Frisch was a Norwegian economist and statistician. He is well known for his effort in founding in 1930 the Econometric Society, the first international association in economics. In Europe it was followed by the European Economic Association in the mid-1980s. Ragnar Frisch was awarded the first Prize in Economic Sciences in Memory of Alfred Nobel, jointly with Jan Tinbergen, "for having developed and applied dynamic models for the analysis of economic processes." Frisch appreciated this prize not quite as much as the Antonio Feltrinelli prize awarded to him in 1961 by the Accademia Nazionale dei Lincei, the old and famous Italian society of which Galileo Galilei was one of the first members.

Frisch is remembered internationally for his contributions to econometrics, macroeconomics and a number of other fields. He is revered in Norway for his role as teacher of students of economics over a period of 40 years and for having founded the Institute of Economics of the University of Oslo. Frisch is also known as a coiner of terms, e.g. econometrics, macroeconomics and quite a few others.

The article is an account of Frisch’s early years, his education as silversmith, study years abroad etc. It includes also his own account of his experiences during the World War II and his advice given to postwar students in 1949.