UiO Faculty of Social Sciences Department of Economics
Main navigation
Back to uio.no
Sub navigation Menu
Research > Memoranda > Memoranda > 2018 > Rank-discounting as a resolution to a dilemma in population ethics

Rank-discounting as a resolution to a dilemma in population ethics 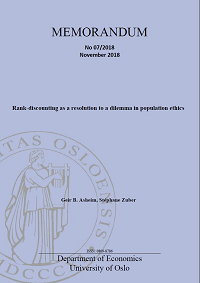 When evaluating well-being distributions in an anonymous (and replication invariant) manner, one faces a dilemma between (i) assigning dictatorship to a single worst-off person, thus succumbing to a tyranny of non-aggregation and (ii) assigning dictatorship to (unboundedly) many better-off persons, thus succumbing to a tyranny of aggregation. We show how this corresponds to a population-ethical dilemma in the variable population setting between, on the one hand, a reversed repugnant conclusion (preferring a very small population with high well-being) and, on the other hand, a repugnant conclusion (preferring a suciently large population with lives barely worth living to a population with good lives) or very sadistic conclusion (not preferring a large population with lives worth living to a population with terrible lives). The dilemma can be resolved by relaxing replication invariance and thus allowing that evaluation in the fixed population setting might change with population size even though the relative distributions of well-being remain unchanged. Rank-dependent criteria are evaluation criteria that resolve this dilemma but fails replication invariance. We provide conditions under which rank-dependent criteria are the only way out of the dilemma. Furthermore, we discuss the following consequence of relaxing replication invariance: It becomes essential to take into account the existence and well-being of non-affected people when evaluating population policies with limited scope.