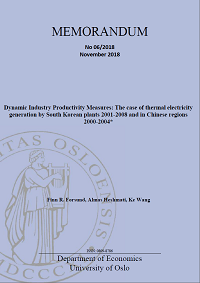 A framework for applied production theory should focus on the crucial features of the industry to be studied. First of all, to be useful for a dynamic study, a distinction has to be made between the theoretical production possibilities before investment takes place and the actual empirical production possibilities in the short run after investment has taken place. Then there is the distinction between production possibilities at the micro level of a plant or even division within a plant, and the aggregate production possibilities for the industry as a whole. Entry and exit of plants, and embodied technological change at the micro or plant level drive the dynamics.  South Korean thermal plants using bituminous coal are studied for the period 2001-2008. The requirement of plant level data has severely restricted the use of the approach. However, the paper shows that such production function concepts can be applied to coal-fired electricity generation aggregated to the Chinese province level and still get valuable structural information for policy analysis. Development in Total Variable Factor Productivity (TVFP) and bias of technical change are estimated and illuminated using figures for isoquant maps, capacity regions in input coefficient space and average- and marginal cost functions both for the plant level in South Korea and for the aggregated province level in China.