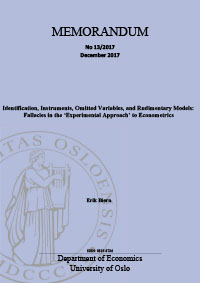 Since identification, instrumental variables and variables exclusion, core concepts in econometrics, are entwined, several questions arise: How is identification related to the existence of IVs? How are identification criteria related to omitted variables? Is omission/inclusion of variables from a model’s equations part of the definition of IVs? Is exogeneity a critical claim to an IV? Is ‘omitted variables’ a meaningful term for a single equation when its ‘environment’ is incompletely described? Which are the borderlines between omitted, observable variables, omitted non-modeled variables, latent variables represented by proxies or measurement error mechanisms? These are among the questions addressed in
this paper, partly with reference to the conflict between ‘experimentalists’ and ‘structuralists’, specifically relating to: (i) the contrast between ‘rudimentary models’ and models for ‘limited information inference’, (ii) the distinction between exogeneity of variables and the orthogonality claim for IVs and disturbances or errors, (iii) the role of predetermined variables in selecting IVs, and (iv) the ‘omitted variables’ concept and the role of IVs in ‘handling’ such variables, when considering the ‘origin’ of the omission.