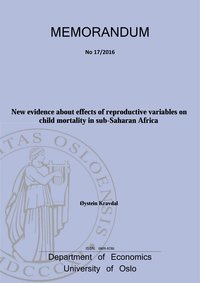 There is considerable uncertainty about how reproductive factors affect child mortality. Joint determinants are difficult to control adequately for, and the studies that have dealt with selection in the most advanced ways have given diverging results. According to very simple models estimated from DHS data from 28 countries in sub-Saharan Africa, mortality is highest for first-born children with a very young mother. Also some other groups of children with a young mother, or of high birth order, have high mortality. Net of such age and birth order differences, a short preceding birth interval is associated with high mortality. The pattern does not change much if a number of other observed characteristics are controlled for, but a different picture appears if time-invariant unobserved mother-level characteristics are taken into account in a multilevel-multiprocess model. According to the latter models, the mortality of a first child goes up as the mother’s age increases above 24, and younger siblings are adversely affected by the later start of childbearing as this means that their mother will be older when they are born. Avoiding a short birth interval reduces the chance that the next child dies, but this effect is weaker than suggested by the simpler models, and younger siblings have a disadvantage because their mothers are older than they otherwise would be. The conclusion is different if it is taken into account that a higher maternal age goes hand in hand with a later calendar period, which may reduce mortality. Assuming that the recent general mortality decline continues, the advice to a woman would be to avoid a very early first birth and short birth intervals. In addition to being an advantage in the short term, there are no disadvantages for the children she may have later. It is also discussed whether a woman’s next child will have lower mortality than her most recently born child. The statistical analysis is backed up by a simulation experiment.