The dynamics of revolutions 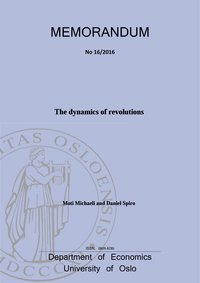 This paper studies the dynamic process of revolutions and mass protests. In a unified framework we explain three classes of revolutions that have been observed historically and earlier models cannot explain: 1) a revolution where the most extreme opponents of the regime protest fiercely and gradually recruit more moderate dissidents; 2) a revolution where moderates, or regime insiders, lead the way and gradually recruit more extreme regime opponents; 3) a revolution where those who dislike the regime the most are gradually pushing the freedom of speech, backed by increased dissent of moderate individuals. These revolutions match the dynamics of many major revolutionary processes, such as the Iranian revolution in 1979, the fall of the communist regimes in eastern Europe in 1989, the Arab Spring in Egypt in 2011, the April Revolution in South Korea in 1960 and the protests on Tiananmen Square in 1989.