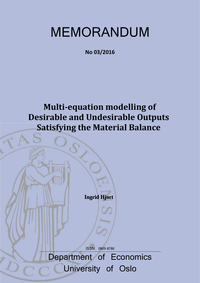 The modelling of the interaction between production activities and the natural environment requires formulating a multioutput production function for intended and unintended outputs. The key feature when modelling joint production of intended outputs and unintended residuals is that the latter stem from the use of material inputs. A multi-equation model building on the factorially determined multi-output model of classical production theory satisfies the material balance that tells us that the mass contained in inputs cannot disappear, but must turn up in the desirable outputs or end up as residuals. Each of the intended outputs and the residuals are functions of the same set of inputs. Some problems with the single equation models most often found in the literature are demonstrated. Abatement activity in the form of end-of-pipe is added and an optimal planning solution is derived using the concept of an environmental damage function for the impact of discharge of residuals into the natural environment. It is shown that the traditional environmental policy instruments, like direct regulation restricting the amount of undesirable residuals discharged to the environment, a Pigou tax on pollutants, and cap and trade all function well. Extending the multi-equation model to allow for inefficiency, three efficiency measures are introduced; desirable output efficiency, residuals efficiency and abatement efficiency. It is demonstrated that these measures can be estimated independently using the DEA model.