Have Inflation Targeting and EU Labour Immigration Changed the System of Wage Formation in Norway? 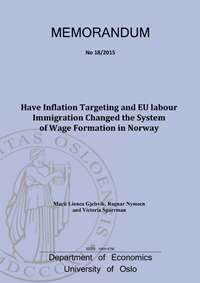 Collective agreements have played a central role in the system of wage formation in Norway for more than fifty years. Although the degree of coordination achieved has been variable, pattern wage bargaining has been a mainstay of the system. We investigate the degree of invariance in wage formation in Norway with respect to two recent structural changes: the transition towards inflation targeting in monetary policy and an unprecedented surge in labour supply due to higher immigration rates. We report empirical results that support the view that a semi-permanent high immigration may affect wages negatively in a significant way. However we do not find evidence that the stability of the arbitration system, and in particular the wage-bargaining pattern, has been changed by labour immigration or by inflation targeting monetary policy. An explanation of why we do not find evidence of structural changing effects of the transition of monetary policy, can be found in the fact that the wage arbitration system itself has syncronized the inflation expectations of the social partners. In that analysis, inflation targeting became a new layer of nominal stabilization, on top of the existing one.