UiO Faculty of Social Sciences Department of Economics
Main navigation
Back to uio.no
Sub navigation Menu
Research > Memoranda > Memoranda > 2015 > Threatening Thresholds? The Effect of Disastrous Regime Shifts on the Cooperative and Non-cooperative Use of Environmental Goods and Services

Threatening Thresholds? The Effect of Disastrous Regime Shifts on the Cooperative and Non-cooperative Use of Environmental Goods and Services 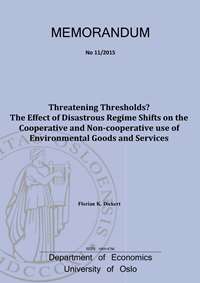 This paper presents an analytically tractable dynamic game in which players jointly use a resource. The resource replenishes fully but collapses should total use exceed a threshold in any one period. The initial level of use is known to be safe. If it is at all optimal to increase resource use, the consumption frontier is pushed once. Moreover, it is shown that the degree of experimentation is decreasing in the safe value of resource use. Non-cooperative agents can take advantage of this feature and coordinate on a “cautious" equilibrium. If the status quo is sufficiently valuable, the threat of the regime shift induces the first-best. If the status-quo is not sufficiently valuable, experimentation will be inefficiently risky. But given that the threshold has not been crossed, the updated consumption frontier will, ex post, be socially optimal. However, there is also a pareto-inferior, “aggressive" equilibrium in which the resource is depleted immediately. Under some conditions, immediate depletion is a self-fulfilling prophecy, although the social optimum is to sustain the resource indefinitely. Closed-form solutions are provided for a specific example and it is shown that the pareto-superior, “cautious" equilibrium is risk-dominant up to a high probability that the opponents play an aggressive strategy. The result that the threat of a disastrous regime shift allows the agents to coordinate on a pareto-superior equilibrium, because it only pays to search for the location of the threshold once, is robust to extensions that account for more general resource dynamics