UiO Faculty of Social Sciences Department of Economics
Main navigation
Back to uio.no
Sub navigation Menu
Research > Memoranda > Memoranda > 2015 > Did US Consumers 'Save for a Rainy Day' before the Great Recession?

Did US Consumers 'Save for a Rainy Day' before the Great Recession? 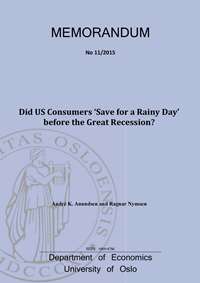 The `saving for a rainy day' hypothesis implies that households' saving decisions reflect that they can (rationally) predict future income declines. The empirical relevance of this hypothesis plays a key role in discussions of fiscal policy multipliers and it holds under the null that the permanent income hypothesis is true. We find mixed support for this hypothesis using time series data for the 100 largest US Metropolitan Statistical Areas, as well as aggregate macro time series, for the period 1980q1{2011q4. That is, income is more often found to predict consumption and saving than the converse. Our modus operandi is to investigate the `saving for a rainy day' hypothesis by testing (weak) exogeneity of income and consumption and by exploring the direction of Granger causality between the two series. We also give evidence that house price changes played a role in the US income and consumption dynamics, before, during and after the Great Recession.