The Economics of Trafficking for Sexual Exploitation 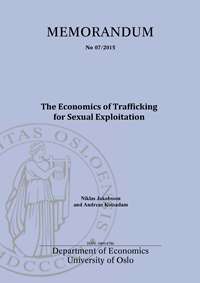 International human trafficking of women for commercial sexual exploitation (henceforth trafficking) is an economic activity in which organizations try to make profits. Trafficking has been identified as a form of modern-day slavery and is a worldwide problem which has grown rapidly in the last decades. Despite this, the economics literature on trafficking is small, which is somewhat surprising given that the economics of immigration as well as the economics of crime are both large areas of research. We review the existing economics literature on trafficking with a particular focus on the gaps in this literature. We also describe the datasets that have been and can be used in studying trafficking and we point to future areas of research. We believe that economists have a lot to contribute to the knowledge of the determinants of trafficking and, as more and improved data becomes readily available, the possibilities for credible quantitative research in this area will grow.