Econometric Sociey 1930: How It Got Founded 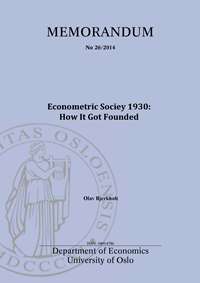 The Econometric Society was founded at an "organization meeting" in December 1930. The invitations had been issued by Irving Fisher, Ragnar Frisch and, Charles F. Roos. In June the same year they had sent a form letter to a list of 31 scholars to solicit advice about establishing an international association "to help in gradually converting economics into a genuine and recognized science." The responses of these scholars from ten different countries are set out at some length in the paper. Rather than persevering in building a constituency of adherents on which a society could be funded the three initiators decided to rush ahead and sent out invitations to an organization meeting to found the Econometric Society at short notice. The paper discusses the reasons for the change of pace, indicating that Schumpeter had a decisive role, and gives an account of the deliberations of the organization meeting founding the Econometric Society.