Keep on Fighting: Dynamic Win Effects in an All-Pay Auction 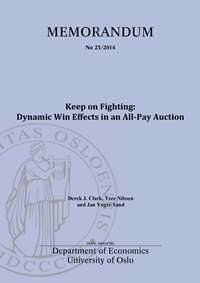 We investigate a multi-period contest model in which a contestant.s present success gives an advantage over a rival in the future. How this win advantage affects contestants.efforts, and whether the laggard gives up or keep on fighting are key issues. We find that the expected effort of the laggard will always be higher than the rival at some stage in the series of contests, and this is most likely to happen when at a large disadvantage or at a late stage in the series.