Contributing to Public Goods as Individuals versus Group Representatives: Evidence of Gender Differences 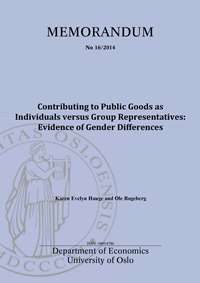 We report evidence from a laboratory experiment comparing contributions in public good games played as individuals to contributions made as group representatives. We find that women alter their behaviour more than men. The change is in an out-group friendly direction: while men’s contributions are largely similar across the two treatments, women increase their contributions by 40% on average as group representatives. The results are consistent with empirical research from labour markets suggesting that female corporate leaders emphasize stakeholders beyond the shareholders to a larger extent than men, and they are in line with stereotypes commonly held regarding male and female leaders.