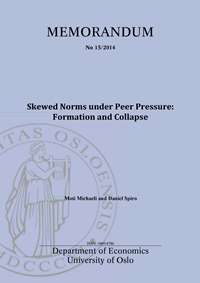 This paper shows that peer pressure may lead to dynamic convergence to a norm that is skewed with respect to preferences in society, yet is endogenously upheld by the population. Moreover, a skewed norm will often be more sustainable than a representative norm. This may explain the skewness of various social and religious norms. By furthermore interpreting a norm as a political regime, we show that biased regimes can be sustained even without the existence of a powerful group with coherent interests. We analyze the pattern by which political regimes collapse and relate it to contemporary revolutions and mass protests.