The Distribution of Individual Conformity under Social Pressure across Societies 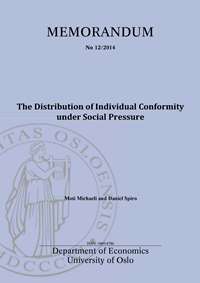 This paper studies the aggregate distribution of declared opinions and behavior when heterogeneous individuals make the trade-off between being true to their private opinions and conforming to an endogenous social norm. The model sheds light on how various punishment regimes induce conformity or law obedience, and by whom, and on phenomena such as societal polarization, unimodal concentration and alienation. In orthodox societies, individuals will tend to either fully conform or totally ignore the social norm, while individuals in liberal societies will tend to compromise between these two extremes. Furthermore, the degree of orthodoxy determines whether those who fairly agree with the norm or those who strongly disapprove it will conform. Likewise, the degree of liberalism determines which individuals will compromise the most. In addition, orthodox societies may adapt norms that are skewed with respect to the private opinions in society, while liberal societies will not do so.