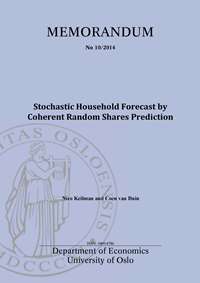 We compute a stochastic household forecast for the Netherlands by the random share method. Time series of shares of persons in nine household positions, broken down by sex and five-year age group for the years 1996-2010 are modelled by means of the Hyndman-Booth-Yasmeen product-ratio variant of the Lee-Carter model. This approach reduces the dimension of the data set by collapsing the age dimension into one scalar. As a result, the forecast task implies predicting two time series of time indices for each household position for men and women. We model these time indices as a Random Walk with Drift (RWD), and compute prediction intervals for them. Prediction intervals for random shares are simulated based on the Lee-Carter model. The random shares are combined with population numbers from an independently computed stochastic population forecast of the Netherlands.

Our general conclusion is that the method proposed in this paper is useful for generating errors around expected values of shares that are computed independently. In case one wishes to use this method for computing the expected values for the household shares as well, one has to include cohort effects in the Lee Carter model. This requires long time series of data.