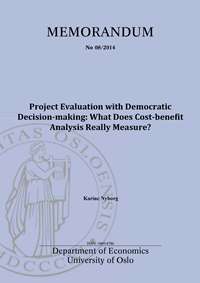 It is often argued that projects involving public good changes should be chosen on the basis of monetary valuation and cost-benefit analysis (CBA). In democratic project selection processes, however, decision-makers cannot generally interpret CBA as measuring projects’ social welfare effects. The reason is partly that decision-makers’ views of the good society differ – that is, they typically do not hold the same social welfare function – and partly because separating efficiency and distribution is even less straightforward in democratic than in dictatorial decision-making processes.