Optimal Migration and Consumption Policies over an Individual's Random Lifetime 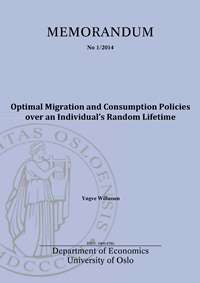 The aim of this study is to determine optimal migration policies for an individual of known age-dependent mortality who accumulates capital by compound interest and also by skill-dependent income. By a continuing choice of several environments, which vary in intrinsic preference and in the rates at which they improve and reward skills, the individual have the option of developing skills, current earnings and residential preference by moving between the environments. Specifying the expected future utility which recognizes the preference for residence as well as for consumption, the corresponding dynamic programming (DP) equations are derived. The optimality of return migration is particularly investigated by studying the movement between two environments. The analysis is then extended to allow for several environments.
The DP-equations are also modified to examine the effect of monetary as well as non-monetary (psychic) costs. In combining the essential causes motivating migration in a tractable dynamic control model that can be used for analysing the impacts of the various factors, this paper is believed to be an contribution to the migration literature.