Fair Intergenerational Utilitarianism: Risk, its Resolution over Time, and Discounting 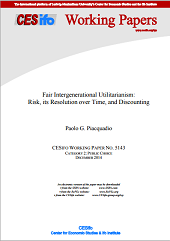 The paper reexamines the welfare economics of intergenerational risk. Risk and its resolution over time are modeled as a decision tree: in each period, the consumption of the current oneperiod living generation is to be traded-off against uncertain benefits of future generations; as time passes, the planner observes the realized shocks and becomes more informed about the economy. The characterized class of criteria, named fair intergenerational utilitarian, measures social welfare in terms of the ratio between the allocated consumptions and an endogenously-determined equitable reference. This allows social preferences to (i) disentangle aversion to intergenerational inequality from aversion to risk, (ii) exhibit a preference for early resolution of risk, (iii) show different discounting formulas depending on the magnitude of risk and on the timing of its resolution, and (iv) avoid extreme policy recommendations in the presence of fat-tailed catastrophic events.