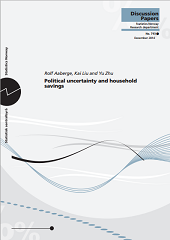 Despite macroeconomic evidence pointing to a negative aggregate consumption response due to political uncertainty, few papers have used microeconomic panel data to analyze how households adjust their consumption after an uncertainty shock. We study household savings and expenditure adjustment from an unexpected, large-scale and rapidly evolving political shock that occurred largely in May 1989 in Beijing, China. Using monthly micro panel data from a sample of the Urban Household Survey, we present evidence that a surge in political uncertainty resulted in significant temporary increases in savings among urban households in China. Our estimates also suggest the channel through which increase in savings is achieved: the increase in savings is driven by reductions in semi-durable expenditure and frequency of major durable adjustment. The uncertainty effect is more pronounced among older, wealthier, and more socially advantaged households. We interpret our findings using existing models of precautionary behavior. By focusing on time variation in uncertainty, our identification strategy avoids many of the potential problems in empirical studies of precautionary savings such as self-selection and life-cycle effects. Our findings on the channel of adjustment also coincide with the predictions from models on consumer durables adjustment combined with income uncertainty.