It's Where You Work: Increases in Earnings Dispersion across Establishments and Individuals in the U.S. 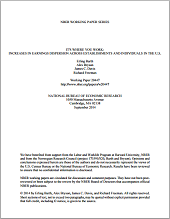