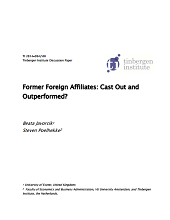 The literature has documented a positive effect of foreign ownership on firm performance. But is this effect due to a one-time knowledge transfer or does it rely on continuous injections of knowledge? To shed light on this question we focus on divestments, that is, foreign affiliates that are sold to local owners. To establish a causal effect of the ownership change we combine a difference-in-differences approach with propensity score matching. We use plant-level panel data from the Indonesian Census of Manufacturing covering the period 1990-2009. We consider 157 cases of divestment, where a large set of plant characteristics is available two years before and three years after the ownership change and for which observationally similar control plants exist. The results indicate that divestment is associated with a drop in total factor productivity accompanied by a decline in output, markups as well as export and import intensity. The findings are consistent with the benefits of foreign ownership being driven by continuous supply of headquarter services from the foreign parent.