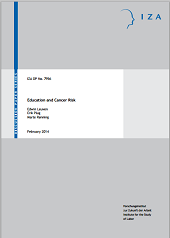 There exists a strong educational gradient in cancer risk, which has been documented in a wide range of populations. Yet relatively little is known about the extent to which education is causally linked to cancer incidence and mortality. This paper exploits a large social experiment where an education reform expanded compulsory schooling during the 1960s in Norway. The reform led to a discontinuous increase in educational attainment, which we exploit to estimate the effect of the reform on various cancer outcomes. Our main finding is that education has little if any impact on cancer risk. This holds for all cancer sites together as well as the most common cancer sites in isolation, with two exceptions. The compulsory school reform lowered the risk of lung cancer for men, but increased the risk of colorectal cancer for women.