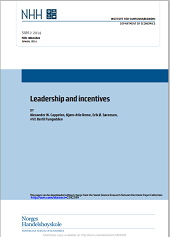 We study how leader compensation affects public goods provision. We report from a lab experiment with four treatments, where the base treatment was a standard public goods game with simultaneous contribution decisions, while the three other treatments allowed participants to volunteer to be the leader in their group and make their contribution before the others. In the three leader treatments, we manipulate the level of compensation given to the leader. Our main finding is that a moderate compensation to the leader is highly beneficial, it increases the average contribution by 63% relative to a situation where the leader is not compensated and by more than 90% relative to a situation without a leader. A further increase in the leader compensation, however, is detrimental to public goods provision; it attracts less morally motivated leaders and creates a social crowding-out effect that makes it harder to lead by example. Finally, we report from a survey showing that the social crowding-out effect is also present in the population at large. We argue that the main findings of the paper are important in many real life settings where we would like to use economic incentives to encourage people to lead by example.