Is There a Development Gap in Rationality? 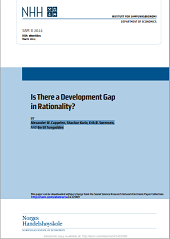 We report an experimental test of the four touchstones of rationality in choice under risk – utility maximization, stochastic dominance, expected-utility maximization and small-stakes risk neutrality – with students from one of the best universities in the United States and one of the best universities in Africa, the University of Dar es Salaam. Although the US and the Tanzanian subjects come from different backgrounds and face different economic prospects, they are united by being among the most able in their societies. Importantly, many of whom will exercise an outsized influence over economic and political affairs. We find very small or no significant differences between the two samples in the degree of rationality according to a number of standard economic measures. An alternative approach is to take cognitive ability (IQ) as a proxy for economic rationality. We show that a canonical IQ test indicates a much larger development gap in rationality relative to our economic tests.