Discussion Papers, Department of Economics, University of Copenhagen. No. 14-10. 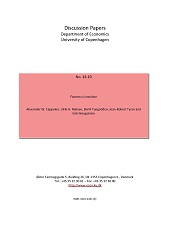 In this paper we provide new evidence showing that fair behavior is intuitive to most people. We nd a strong association between a short response time and fair
behavior in the dictator game. This association is robust to controls that take account of the fact that response time might be aected by the decision-maker's
cognitive ability and swiftness. The experiment was conducted with a large and heterogeneous sample recruited from the general population in Denmark. We nd
a striking similarity in the association between response time and fair behavior across groups in the society, which suggests that the predisposition to act fairly is
a general human trait.