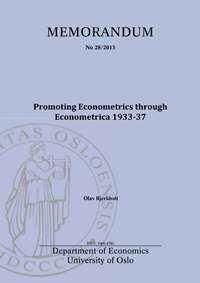 The journal of the Econometric Society, Econometrica, was established in 1933 and edited by Ragnar Frisch for the first 22 years. As a new journal Econometrica had three key characteristics. First, it was devoted to a research program stated in few but significant words in the constitution of the Econometric Society and for many years printed in every issue of the journal. Second, it was the first international journal in economics. Third, it was the journal of association (Econometric Society) with members committed to a serious interest in econometrics. The paper gives a brief account of the circumstances around the establishment of the journal and of the relationship between Frisch and Alfred Cowles 3rd who in various capacities played a major role in launching the journal and keeping it going. It furthermore conveys observations and comments related to the editing of the first seven volumes of Econometrica, i.e. 1933-39. The main aim of the paper is to shed light on how the editor and a small core group of econometrician attempted to promote econometrics via Econometrica. The paper is overwhelmingly based on unpublished material from Frisch’s editorial files. Editorial principles, controversies, and style are illuminated through excerpts from the editorial correspondence. The paper was presented at ESEM-67, University of Gothenburg, 26-30 August, 2013.