Variations on a Theme by Gossen 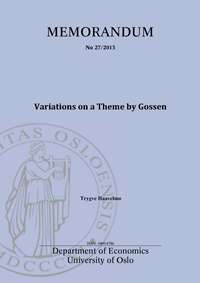 The memo consists of six papers on a common theme: applying economic analysis to subjects at the time, 1972, considered non-economic. The first paper considers changes in preferences. The second considers strategies of a regime and its opposition. The Third discusses collective decision making in the light of Arrow's possibility theorem and the voting paradox. The fourth discusses some problems of inefficiency in modern industrialised societies, and the consequences on the welfare of the population. The fifth discusses some aspects of redistributive policies, and the sixth various instances of the conflict between individual and collective rationality, particularly in the case of environmental and population policies.