Trygve Haavelmo at the Cowles Commission 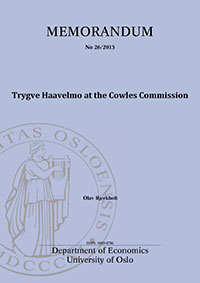 The article reviews the early history of the Cowles Commission, its close and intertwined relations with the Econometric Society (ES), and the influence and guidance of Ragnar Frisch. It provides much detail on the three rounds of choosing a research director, in 1937-38, in 1939 and at the end of 1942. Haavelmo’s work in the early 1940s came to play a major role for the econometric research at the Cowles Commission under Jacob Marschak as research director 1943-48. The article points to the importance of Abraham Wald and Jacob Marschak for the success of Haavelmo’s venture and its influence and tells the story of how it came about that Haavelmo’s ideas were adopted, applied and disseminated by the Cowles Commission. Thus the mention of Trygve Haavelmo in the title is referring also to his econometric ideas. The ideas themselves and their further evolvement at the CC have been a dominating theme in the history of econometrics literature, e.g. Hildreth (1986), Epstein (1987), Morgan (1990), Qin (1993) and Christ (1994). The article discusses the recruitment, the inner workings and various other concerns of the Cowles econometricians, from Marxism to Black Magic. It recounts at some length the efforts made by Marschak to recruit Abraham Wald to the University of Chicago and the Cowles Commission. The article can be read as a sequel to Bjerkholt (2005, 2007).

This article of the Memorandum-series has been published in Econometric Theory, 2014.