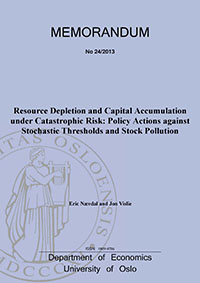 An intertemporal optimal strategy for accumulation of reversible capital and management of an exhaustible resource is analyzed for a global economy when resource depletion generates discharges that add to a stock pollutant that affects the likelihood for hitting a tipping point or threshold of unknown location, causing a random“disembodied technical regress”. We characterize an optimal strategy by imposing the notion “precautionary tax” on current extraction for preventing a productivity shock driven by stock pollution and a capital subsidy to promote capital accumulation so as to build up a buffer for future consumption opportunities should the threshold be hit. The precautionary tax will internalize the expected welfare loss should a threshold be hit, whereas the capital subsidy will internalize the expected post-catastrophic long-run return from current capital accumulation.