Equilibrium Unemployment Dynamics in a Panel of OECD Countries 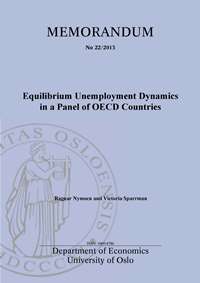 We focus on the equilibrium unemployment rate as a parameter implied by a dynamic aggregate model of wage- and price setting. The equilibrium unemployment rate depends on institutional labour market institutions through mark-up coefficients. Compared to existing studies, the resulting final equation for unemployment has richer dynamic structure. The empirical investigation is conducted in a panel data framework and uses OECD data up to 2012. We propose to extend the standard estimation method with time dummies to control and capture the effects of common and national shocks by using impulse indicator saturation (WG-IIS) which is not previously used on panel data. WG-IIS robustifies the estimator of the regression coefficients in the dynamic model, and it affects the estimated equilibrium unemployment rates. We find that wage coordination stands out as the most important institutional variable in our data set, but there is also evidence pointing to the tax wedge and the degree of compensation in the unemployment insurance system as drivers of equillibrium unemployment.