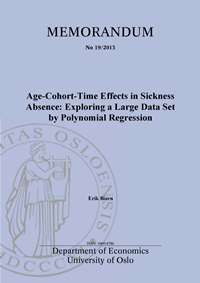 Identification of equations explaining a continuous variable, e.g., the length of sickness absence spells, by age, cohort and time (ACT), subject to their definitional identity is reconsidered. Various extensions of a linear equation to polynomials are explored. If no interactions between the ACT variables are included, only the coefficients of the linear terms create identification problems. A data set with 4.5 million individual observations for long-term sickness absence in Norway is used. The sensitivity of the estimated marginal effects of cohort and age on the length of the absence spells, at the sample mean, is illustrated. Notable differences are found between linear and quadratic equations on the one hand and cubic and fourth-order polynomials on the other. Representing heterogeneity by cohort effects is compared with representing heterogeneity by random and fixed individual effects. On the whole, the age coefficients in the estimated regressions are quite sensitive to how heterogeneity is modeled.