Energy Intensive Infrastructure Investments with Retrofits in Continuous Time: Effects of Uncertainty on Energy Use and Carbon Emissions 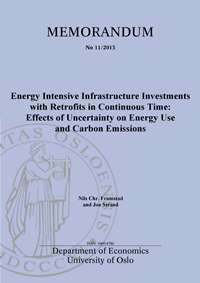 Energy-intensive infrastructure may tie up fossil energy use and carbon emissions for a long time after investments, making the structure of such investments crucial for society. Much or most of the resulting carbon emissions can often be eliminated later, through a costly retrofit. This paper studies the decisions to invest in such infrastructure, and retrofit it later, given that future climate damages are uncertain and follow a geometric Brownian motion process with positive drift. It shows that greater uncertainty about climate cost (for given unconditional expected costs) then delays the retrofit decision by increasing the option value of waiting to invest. Higher energy intensity is also chosen for the initial infrastructure when uncertainty is greater. These decisions are efficient given that energy and carbon prices facing the decision maker are (globally) correct, but would be inefficient when they are lower, as typical in practice. Greater uncertainty about future climate costs will then further increase lifetime carbon emissions from the infrastructure, related both to initial investments, and to too infrequent retrofits when this emissions level is already too high. An initially excessive climate gas emissions level is then likely to be worsened when volatility increases.