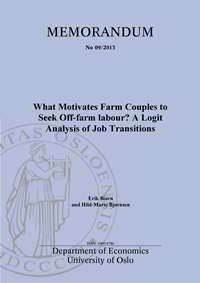 In this paper some labour market consequences of transitions in the agriculture sector are examined by combining a 20-year unbalanced panel data set from Norwegian farm couples (households) and logit modeling of one-period transition probabilities. The multi-dimensionality of the problem follows from two decision makers (partners) having four possible choices in each period: the farm operator and spouse can be working fully on the farm or having supplementary outside occupation. Transition probabilities are modeled by five alternative logit models. State dependence is represented to different extent. The most flexible model has a high number of parameters. Overall, the results indicate that transitions have mainly bee directed towards the state where both partners work off the farm. An increasing livestock reduces the probability of moving to states with substantial off-farm labour participation. Increased farm size tends to have the opposite effect. Recent on-farm investments come out with ambiguous effects, and the pattern seems to change during the observation period. Having children seems to motivate operators to withdraw from off-farm labour and spouses to stay in or entering off-farm employment.