Economic Regime Shifts and the US Subprime Bubble 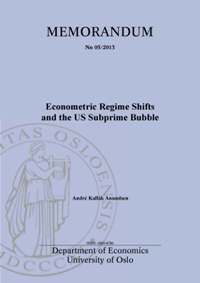 Using aggregate quarterly data for the period 1975q1–2010q4, I find that the US housing market changed from a stable regime with prices determined by fundamentals, to a highly unstable regime at the beginning of the previous decade. My results indicate that these imbalances could have been detected with the aid of real time econometric modeling. These results are based on the detection of huge parameter non-constancies and a loss of equilibrium correction in two theory derived cointegrating relationships shown to be stable for earlier periods.With reference to Stiglitz’s general conception of a bubble, I use the econometric results to construct two bubble indicators, which clearly demonstrate the transition to an unstable regime in the early 2000s. Such indicators can be part of an early warning system and are shown to Granger cause a set of coincident indicators and financial (in)stability measures. Finally, it is shown that the increased subprime exposure
during the 2000s can explain the econometric breakdown, i.e. the housing bubble may be attributed to the increased borrowing to a more risky segment of the market, which may have allowed for a latent frenzy behavior that previously was constrained by the lack of financing.