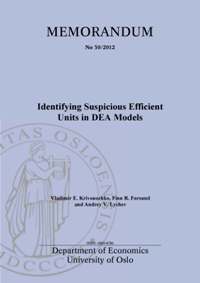 Applications of the DEA models show that inadequate results may arise in some cases, two of these inadequacies being: a) too many efficient units may appear in some DEA models; b) a DEA model may show an inefficient unit from the point of view of experts as an efficient one. The purpose of this paper is to identify suspicious units that may unduly become efficient. The concept of a terminal unit is introduced for such units. It is shown by establishing theorems how units can be identified as terminal units and how different definitions of suspicious units are related. An approach for improving the adequacy of DEA models based on terminal units is suggested, and an example shown based on a real-life data set for Russian banks.