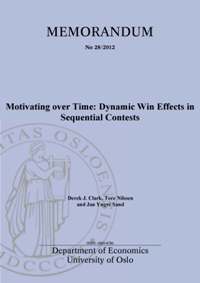 In this paper we look at motivation over time by setting up a dynamic contest model where winning the first contest yields an advantage in the second contest. The win advantage introduces an asymmetry into the competition that we find reduces the expected value to the contestants of being in the game, whilst it increases the efforts exerted. Hence it may seem that a win advantage is advantageous for an effort maximizing contest designer, whereas in expectation it will not be benecial for the players. We also show that the principal should distribute a majority of the total prize mass to the second contest. With ex ante asymmetry, the effect of the win advantage on the effort in the second contest depends on how disadvantaged the laggard is. A large disadvantage at the outset implies that as the win advantage increases, total effort for the disadvantaged firm is reduced as the discouragement effect dominates the catching-up effect. If the inital disadvantage is not significant, then the catching-up effect dominates and the laggard increases its total effort.