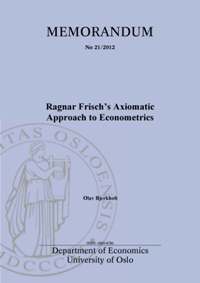 Ragnar Frisch’s concept of econometrics was broader in scope than the more restricted connotation it has today as a sub-discipline of economics, it may be more properly rendered as a reconstruction of economics along principles inspired and drawn from natural sciences. In this reconstruction an axiomatic approach played a key role. The general aim of Frisch’s axiomatic approach was to argue in favour of using axiomatics as a basis for theorizing in economics and the modelling of individual behaviour. His first axiomatic approach was undertaken in 1926. In 1933 Frisch presented an extended set of axioms for quantifying utility in a lecture series in Paris. Frisch returned yet another time to the same topic when he attended a research conference at Cowles Commission in 1937. He presented then a more general choice-field theory, the core of which was a system of axioms for individual behaviour, published only as a (long) abstract. After this latter attempt Frisch’s interest in explicitly axiomatization seem to have waned, although his promotion of axiomatics in economics may be traced in some other of his contributions. As a national accounting pioneer Frisch also argued for an axiomatic approach towards national accounting. The article is amended from a paper originally presented at Axiomatics in Economics: the Rise and Fall, European Conference on the History of Economics, Siena, 4-6 October, 2007.