Measuring Efficiency in the Public Sector 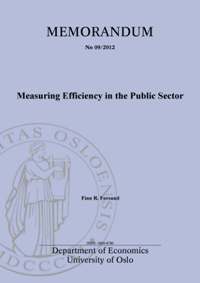 The distinction between the concepts outputs and outcomes can be made operational based on the consideration of the degree of control a public service producer has over its production activity. Resources are transformed into service outputs under the control of the organisation in question, while outcomes represent some higher social goals than outputs and are determined by the outputs and other exogenous variables, but these will usually be outside the control of the organisation. The link to the calculation of savings potentials and efficiency measurement is provided based on introducing the concept of a benchmark frontier technology for the type of production in question. A new measure of overall preference efficiency is introduced and its decomposition into output-oriented technical efficiency and mix efficiency is shown. The rather monumental task of providing the necessary information for calculating mix efficiency is highlighted.