Efficiency and Productivity in the Operational Units of the Armed Forces 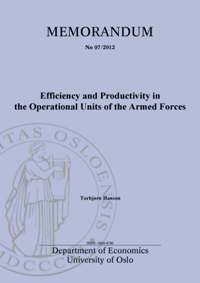 Most nations spend a considerable part of their gross domestic product (GDP) on defense. However, no previous study has addressed the productivity and efficiency of the core area of the armed forces, operational units, using Data Envelopment Analysis (DEA). Introducing a model for the production process of an operational unit, productivity and efficiency are estimated by DEA for units of one branch of the Norwegian armed forces. Small samples are a characteristic of DEA studies in the military, and the public sector in general, resulting in a lion’s share of the units being estimated as fully efficient. We find that, by using the bootstrap technique to estimate confidence intervals, we can point at the uncertainty of the estimates and reduce the number of candidates for best practice.