In the Shadow of the Labour Market 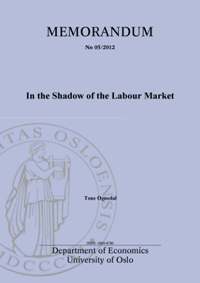 Why do not people evade more taxes when their gain from evasion is higher than the expected penalties? Why does only a small minority evade when a large majority is willing to? These tax evasion puzzles are explained in a labour market framework where employees may combine reported work in firms with self-employed shadow work. On the margin, time spent on self-employed work reduces labour productivity in reported work. This creates an equilibrium where small, low-productive firms offer jobs with low wage rates but time for self-employed shadow work, while larger, more efficient firms offer jobs with higher reported wage rates but no time for shadow work. Improving the tax morale may not reduce evasion but only sort the honest people into jobs with no time for shadow work. Shadow work leads to an inefficient allocation of employees since it has the effect of a subsidy to low productive firms. Both lower taxes and minimum wages reduce evasion and improve labour allocation but harms low productive firms.