Macroeconomic Shocks and the Probability of Being Employed 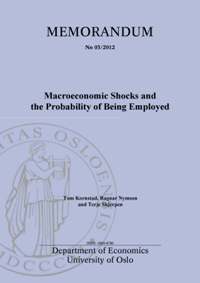 Macroeconomic theories take polar views on the importance of choice versus chance. At the micro level, it seems realistic to assume that both dimensions play a role for individual employment outcomes, although it might be difficult to separate these two effects. Nevertheless the choice and chance dimension are seldom treated symmetrically in models that use micro data. We estimate a logistic model of the probability of being employed among married or cohabitating women that are in the labor force. Besides variables that measure individual characteristics (choice), we allow a full set of indicator variables for observation periods that represent potential effects of aggregate shocks (chance) on job probabilities. To reduce the number of redundant indicator variables as far as possible and in a systematic way, an automatic model selection is used, and we assess the economic interpretation of the statistically significant indicator variables with reference to a theoretical framework that allows for friction in the Norwegian labor market. In addition, we also estimate models that use the aggregate female and male unemployment rates as ‘sufficient’ variables for the chance element in individual employment outcomes. Data are for Norway and span the period 1988q2−2008q4.