Western Extremists and the Russian Invasion of Ukraine in 2022 - All Talk, But Not a Lot of Walk 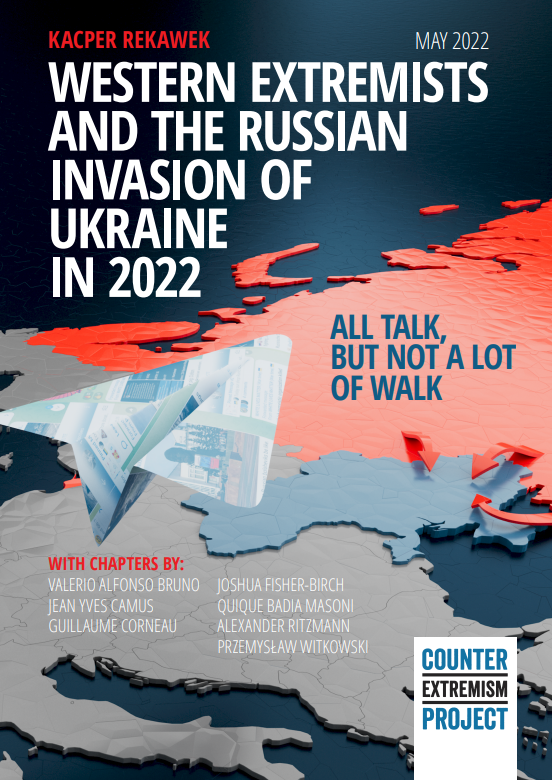 The Russia-Ukraine war has been attracting foreign fighters/volunteers since 2014. Initially, the number of foreign individuals joining the conflict was limited. However, the invasion of Ukraine by Russia on February 24, 2022 provided a seemingly seismic shift in this field with up to 20,000 foreigners expressing an interest in joining the Ukrainian war effort.

Foreign fighters that joined the conflict initially after 2014 hailed from various ideological backgrounds—including from the far right, far left, or red-brown national communists—and fought on both the Ukrainian and Russian/pro-Russian sides of the conflict. The 2022 foreign volunteers, however, seem less radical and politicized in nature. Their mobilization is conducted mainly through official channels of the Ukrainian government and less through informal channels setup by non-state-linked “volunteer battalions” and militias, as was the case in 2014.

Precise numbers of foreign fighters having traveled to Ukraine and involved in combat since the end of February 2022 are currently difficult to establish. However, given the available information, it is reasonable to deduce that only a fraction of those who indicated an interest in traveling to Ukraine after February 2022 actually did so. Their number ranges from merely several hundreds to a few thousands. This is dwarfed by tens of thousands of Ukrainian volunteers who joined units in Ukraine’s Territorial Defense Force (TDF).

Among these foreigners, some individuals with extremist convictions have also traveled to the war zone. Violence-oriented foreign extremists have been in Ukraine since 2014, and at least two of these individuals have been killed in the latest round of hostilities. Both were on the pro-Russia side, including one who was a left-wing extremist.

To correctly assess the current flow of violence-oriented extremists to the war zone, one must study the recruitment input, i.e., local and right-wing scenes, their attitudes toward the recent Russian invasion, and whether their members have traveled to Ukraine to fight.

An analysis of the far-right and right-wing extremist scenes in seven countries—the United States, Canada, Spain, Italy, France, Germany, and Poland—reveals that the current conflict has not led to a significant flow of extremists to the war zone. There is a lot of discussion and debate among extremists, but very few have traveled to Ukraine. For example, about 30 from Germany and France seem to have traveled. In other cases, such as with Canada, hardly anyone from the local far-right and right-wing extremist milieus appears to have made the trip.

Furthermore, it is currently unclear how many of these violence-oriented extremists who have traveled are actually involved in combat.

Regarding the stance of the individual national extremist scenes, most have not changed their ideological position since February. For example, most pro-Russian extremist groups and networks have not switched allegiances.

At the same time, the study of the recruitment output—i.e., the Ukrainian units which have a history of allowing foreigners in their ranks—does not point to a flourishing milieu that is ready to accept and deploy Western extremist foreign volunteers in its ranks. Individual extremists from Western countries are in Ukraine in general and in Kyiv in particular, but their numbers pale in comparison to a) wider international volunteers and b) Ukrainian volunteers for the TDF.

Foreigners in Ukraine have not yet coalesced into recognizable highly ideological fighting units and, as individuals, have been largely unsuccessful in acting as recruiting multipliers for sympathizers in their home countries.

Units with a history of featuring foreigners since 2014 either recruited a small number of such individuals in 2022 (i.e., Azov), are nationally focused and do not advertise for foreigners to join (i.e., Belarusian and Russian units on the Ukrainian side), or lack coordinated strategies of recruiting foreigners to join their outfit (i.e., other far-right Ukrainian organizations fielding “their own” TDF units).

In Ukraine, incoming foreigners are distributed across different units, and there is typically little screening overall for ideological extremism. However, units such as the Georgian National/Foreign Legion that has been set up to receive foreigners does not seem to follow discernible targeted recruitment strategies focusing on attracting foreign extremists.

Therefore, the identification of foreigners within far-right ideologically motivated units within Ukraine is a first but not necessarily a sufficient indication of the ideological stance of the foreign recruits themselves, complicating monitoring efforts focused on violence-oriented foreign extremists in the war zone.

The low number of violence-oriented extremists currently involved in the war in Ukraine does not mean that this group of individuals will not present a challenge to domestic security upon their return. The combination of a violence-oriented ideology; potential combat training and experience; access to arms, ammunition, and explosive material in the conflict zone; as well as improved transnational networking opportunities for these extremists is worrying and requires mitigation measures.

Therefore, monitoring violence-oriented extremists travel to and from the war zone as well as collecting information on their actions and activities in the war zone should also be a priority. This is especially the case if the departure from their home countries cannot be prevented.

Finally, governments should begin exploring opportunities for managing returning violence-oriented extremists from the war zone. Given the currently small number of high-risk individuals, this should be well within already established capacities. This returnee management should include all elements from prosecution to disengagement as well as deradicalization and potential reintegration. As the country case studies in this report demonstrates, so far, few if any governments have begun addressing this issue.