Reconnecting Forward: Nasjonal Samling’s Apocalyptic Temporality as a Key to the Fascist Regime of Historicity 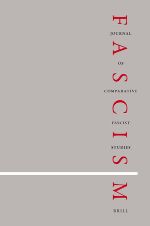 This article analyses the conception of history or ‘regime of historicity’ structuring the ideology of the Norwegian fascist party, Nasjonal Samling (1933–1945). It highlights the value of the theory of palingenetic ultranationalism to the understanding of fascist temporality generically and specifically. Generically, because the findings show how Nasjonal Samling’s regime of historicity followed the same structure of revolution and eternity, decay and rebirth, as other fascist movements did. Specifically, because it also shows how Nasjonal Samling drew heavily on Norwegian national myths. The ideologues of ns recoded these myths, and integrated them into their own palingenetic, apocalyptic, and – after 1935 – antisemitic grand narratives. These crystallized in a triadic scheme, forming a fascist regime of historicity, structured around the myth of past greatness, followed by decadence, combined with a fantasy of a future revolutionary rebirth of the nation.